If you’ve hung around this little blog for very long, you’ll probably already know how much I love the stuff from Our Journey Westward.  I have several posts where I’ve talked about and reviewed the fantasticNaturExplorers Series.

I was excited to try out the Living Literature Grammar Packs for Language Arts.

Grammar is something I have always struggled with as it always feels forced… it’s just one of those subjects that I always felt simply ‘needed to be done’.  Which, let’s get honest, it IS one of those subjects.  How many people LOVE Grammar?  Well, maybe some people do… but not most.  And especially usually not 10-year-old-boy people.

So, searching for interesting and creative ways to teach Grammar is a bit of a hobby for me.  (I know, I’m so exciting).


We actually really liked these!  I used them for both my 10 year old son (almost 11) and my 9 year old daughter.

What Cindy has done is take several well-known/loved living children’s books and used them to teach various grammar and language arts concepts.  Some of the titles include: Papa Piccolo, Owl Moon, Mailing May, Storm in the Night, The Hatmaker’s Sign, Mrs. Katz and Tush (all Five in a Row titles!), as well as titles like, Alejandro’s Gift, Harry the Dirty Dog, Goin’ Someplace, among others.

This program is geared to 3rd to 5th graders (or in and around that ball park).

There are 15 titles in all – each book is a ‘pack’.  Cindy recommends using one pack per week, or you can just pop in a Grammar Pack whenever you feel like it!  I would say, about a week is pretty much right on if you are doing a light amount of grammar daily combined with various other language arts activities (we also do copywork, dictation, etc).

The types of skills covered in this program include: identifying the author/illustrator of a book, comprehension, characters, setting, sequence of events, descriptive words, alliteration, onomatopoeia, personification, and much of the parts of speech (nouns, verbs, adjectives, adverbs, prepositions, interjections, etc.).  The program also goes into sentence structure, word usage (think homonyms, synonyms, compound words, contractions, etc.), as well as spelling and some writing introduction.  Yep, there is a TON in these little packs!

I also love the layout of the PDF download.  Cindy does a great job with her programs because everything you need is right there.  She even includes a Preposition List, and at the end, all the answers to every single question in every single pack (oh, bless you, Cindy~!).

It is a very straight forward program… basically: download, print what you want to use, and start.

The only exception for this particular program is that you would need the books, or at least, it would be beneficial to have the books.  There are several references to certain pages of the books, etc. so not having it would be a major draw back.

So, you would need to get your hands on the titles, or at least a good number of them.  Several are available in most library systems.  If you use or have used Five in a Row, you will likely have many of them already (we did!).

How we Used the Living Literature Grammar Packs

Once I downloaded the PDF from the Shining Dawn site, I browsed through the introduction pages and decided which packs we would start with – which, basically was just based on which books we already had on our shelf!

In the pasts few weeks we have used the packs for Owl Moon, Papa Piccolo, and Storm in the Night.  Let’s take a look at how we used Papa Piccolo and Owl Moon.

Audrey really enjoys this grammar program.  It’s neat because she can use many of her loved picture books for grammar instruction, which makes it more enjoyable and familiar.  The work pages made daily ‘prep’ super easy (hooray) and we were ready to go at any time, as long at I had printed the pages ahead of time.

Some examples from this pack:

First, Audrey identified that Papa Piccolo’s genre is fiction.  Then she did an activity where she circled preposition in sentences from the book.  She was then asked to think about Piccolo’s character in the beginning of the story compared to the end and make a chart to show the differences.

Among other things, Audrey also practiced her helping verbs, corrected errors in four sentences, and wrote her own sentence using alliteration.

Simon is my reluctant man.  Oh, how I love him and his reluctance.  Really, I do – it makes him, well, him.  It also keeps me on my toes.  But language arts and Simon aren’t the best of friends.  I’m happy to report, however, that he DID enjoy these Grammar Packs!  They are simple enough, straight forward enough, and gentle enough that even a reluctant writer can accomplish the work without feeling overwhelmed.

Here’s he we covered.

He started with identifying the author/illustrator, then divided words into syllables, he identified pronouns, subjects, predicates, and adverbs in carious different ways.  He then corrected several sentences from the book by identifying the mistakes and rewriting them well.

Simon used words from the book to create his own sentences, identified the setting and main character.  He also had sentences where he needed to decide whether they contained a simile, onomatopoeia, personification, or alliteration (there were 8 sentences).   He then did an activity where he combined simple sentences into longer, complex ones.

He worked on singular vs. plural nouns as well as present and past tense verbs.  There were then a series of comprehension-type questions, followed by a spelling list using words from the book.

I think Cindy has done a great job creating something interesting, easy-to-use, and very affordable for parents and kids.  Seriously… $8.95?  For what you receive – this price is crazy low.  And this is the case with every one of Cindy’s unit studies and curriculums.  They are a REALLY GOOD value, in my opinion.  And instant access via download is very nice as well – no shipping costs, no waiting, just click, purchase, download, and start.  Love it.

These packs offer a different, ‘living books’ spin on grammar and I love that – especially as a Charlotte Mason homeschooler and a parent who loves to present my kids with as much living book learning as possible.

If you already own several of the books or can get your hands on the titles, this is a great program! 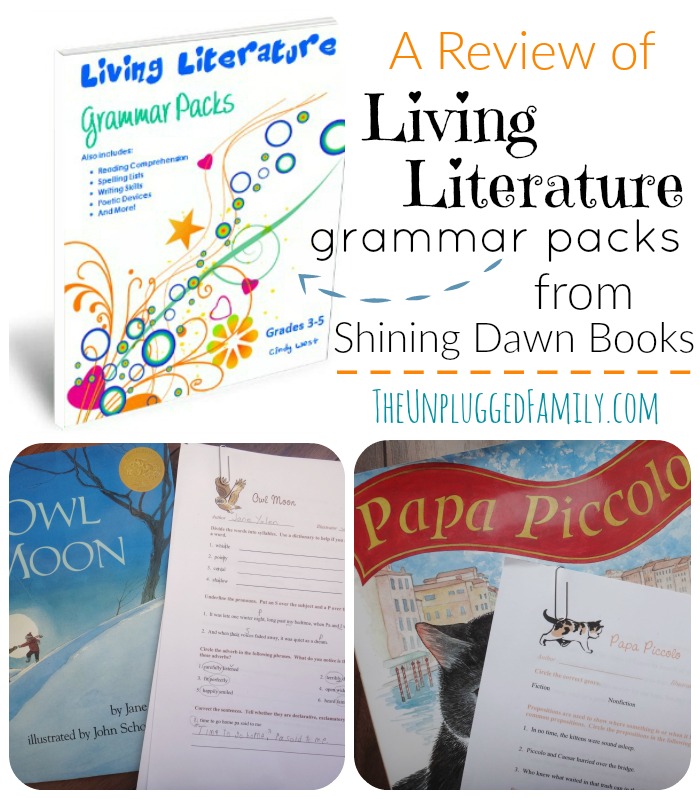